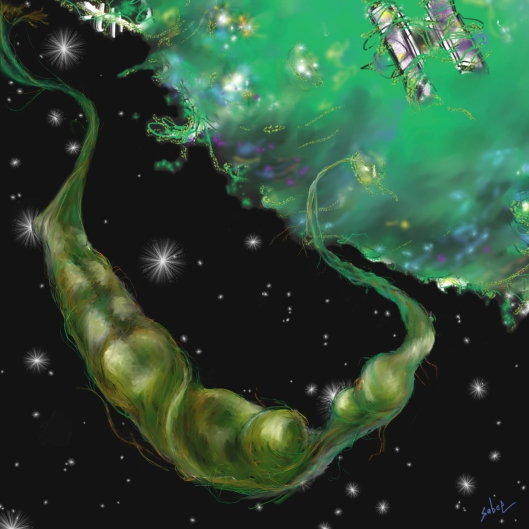 Slowly, nearly imperceptibly so, the broken spindle that was the OPEV Beagle drifted away from the massive, twisted ball of impossible foliage. Further away from the thin creeper that had caught Slim and Ash.

A hundred meters out from the ship, Susan floated, helpless at the end of the line tethering her to the Beagle’s hull, as the voracious plant consumed first Slim and then Ash. The vine distended obscenely to accommodate their bodies.

“‘I love you’?” she echoed, staring at the lumps in the vine that had once been her crewmates. She could see the round bumps of their helmets, the curve of shoulders and hips. She could see Ash’s fucking feet, for Christ’s sake. “What the fuck am I supposed to do with that, you stupid fucker?”

“No,” Susan said. “You don’t get to do that to me. Bastard. You don’t get to say something that, that asinine and that fucked up and get away with it. You hear me? Get your ass back here right now!”

She shook Ash’s tether, extending out another hundred meters toward the carnivorous vine. The wave traveled the length of the nylon line. The end twitched like the tail of an agitated cat.

“Susan,” Amelia said again. “Listen to me. You need to come inside now.”

“We have to help him, ‘Melia. Them. Please. You can bring the ship closer. He can’t die like this.”

Tharp’s voice cut in. “Amelia, don’t you dare. Susan, get back in here now. That’s an order.”

Some folks loved the space-walk, loved being out in the void, with as little as humanly possible between them and endless stars. Jaworsky was not one of them. The suit was clunky and uncomfortable, and the idea of a simple mishap turning into explosive decompression made his balls clench.

He’d never let that on, though. Good thing we don’t have scrotum inspectors, he thought. Give Tharp enough time and resources, though…

Jaworsky kept his eyes on the hull. One step at a time. The click-slap of one boot coming down, the magnets engaging as pressure was applied. Another click as the other boot’s magnet shut off to promote — how the fuck did those marketing assholes put it? — a natural walking experience.

Somewhere above his head, Susan was losing her shit. He asked Amelia to cut Susan’s channel out of his feed. It was taking everything he had not to lose his shit, too.

Amelia fed him directions, so he wouldn’t have to look up. He didn’t want to look up, not until he had to.

As he moved around the curve of the hull, Susan’s line came into view. He hurried toward where it anchored to the hull.

There was no discernible response.

“Hey! Hot stuff!” Jaworsky barked the words. “Enough of that shit. I’m bringing you in now.”

He wrapped a gloved hand around Susan’s tether and pulled gently. A sudden image of him and Susan floating past each other — her toward the ship and him away from it — made him jam his toes under anchor.

For a second, the words made no sense to Jaworsky. Then he pulled with everything he had. Amelia screaming in his ear: “Ohgodohgodohgod.” There was inertia, the resistance of a body at rest to sudden motion, and a sickening moment when Jaworsky’s feet came off the surface of the hull. His toe caught under the bar of the anchor, slid…

And then the tether came loose, and Jaworsky’s boots slapped down onto the metal plating.

The line pooled around Jaworsky’s feet, spooled over him. He struggled to keep free of it. Susan’s cries had turned to anger, and a steady stream of curses barraged him.

He steeled his nerve, and looked up.

It had worked. Susan was hurtling toward the ship — toward him, in fact. And beyond her…

“Jesus,” he breathed. “It’s like one of those egg snakes.”

And then Susan slammed into him.

Jaworsky fell back on his ass. Susan’s faceplate smacked against his; Jaworsky held his breath, waiting for an explosion of Plexiglas and air, but fortunately neither cracked. Momentarily detached from the hull, the two started to bounce away the ship. Scrabbling wildly, he managed to get hold of the anchor, and then caught Susan’s leg before she floated away.

Jaworsky’s hand — his artificial one — spasmed, letting go of the anchor for a single, vertiginous moment. Just for a second, and then it was working again, and Jaworsky wrapped his errant fingers around the metal bar and prayed they would hold.

He pulled her back to the hull’s surface until her boots clicked in recognition and glued her feet down. He struggled to right himself as Ash’s tether spooled down around them.

He tried to think of something smartass to say to goad Susan into willingly heading back to the air-lock, but all he could think about was Slim, swallowed up by that plant, all alone.

When he finally managed to tear his eyes away from the distended vine, he realized Susan had left. Trailing behind her was Ash’s tether, like seaweed on a half-drowned sailor, as she trudged toward the airlock.

Jaworsky coiled Susan’s abandoned tether over his mutinous limb, and followed her home.